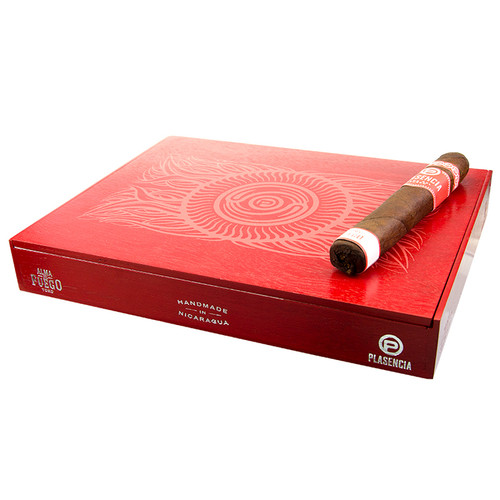 The Plasencia family has been growing tobacco and making cigars for over five generations. Making many popular bands like Rocky Patel, Gurkha, & Romeo y Julieta, the chances you tasted a cigar or tobacco grown by the Plasencia's is very likely. The Plasencia's decided to create their own super premium line that showcase their exception skill in cigar making with a handful of premium offerings.

The third installment in the five-part Alma series. The Plasencia Alma Del Fuego blend represents Plasencia's most profound expression of Ometepe to date. Ometepe, is a volcanic island in Lake Nicaragua, where the ultra-rich soil produces very distinct and flavorful tobacco. Most of the tobacco in Alma del Fuego is from Ometepe, though Plasencia has aged these sun-grown tobaccos for seven years—longer than he has treated Ometepe leaf in the past, which brings out the tobaccos true flavor profile. The wrapper is from the Jalapa region of Nicaragua, one of the two binders are from Ometepe, as well as half the filler. All the tobacco was grown by Plasencia family in Nicaragua the cigars are expertly rolled and box-pressed. The body is medium-full and full in flavor, producing loads of earth, leather, and espresso with a spicy finish.

Product Description GREAT HUMIDORS AND CIGARS COMBO. The Combo Executive is perfect as an executive gift or for rewarding the hard working executive for a great job...even if the executive is...

Product Description SIENNA leather case for cigars in Midnight Black has 2 fingers. The case is extremely well made and the leather’s extraordinary finish is smooth with a gentle shine. Just...