The Berger and Argenti Fatso is back...but only for a short while. We just received the last of the Fatso cigars that were made. It's just a few but if you hurry you'll find out what all the hoopla was about when they were first introduced.

This was a very limited production cigar and a very tasty smoke. It has a unique and interesting almost flat shape with lots of smooth full body complex flavors. It starts with a slight pepper spiciness that is balanced by a sweet earthiness. You can taste the sweet earthiness and woods, some pepper notes, and rich flavors that include coffee, cocoa, leather and caramel. Fatso has a long delicious finish. Now you see why they sold out so quickly.

Here's why the Fatso has not been available for a while. It was handmade in Nicaragua by the fast growing cigar company Berger & Argenti. They are known for their Entubar cigars and Clasico cigars. The Entubar also had a unique box-pressed shape, as the Fatso does, with ligero tobacco sticking out at the foot. Entubar was almost a cigar within a cigar. It got top ratings from everyone you can think of, even Cigar Aficionado gave it a 91and that was the lowest awarded by anyone who reviewed and rated the cigar. The Entubar line included the Quad Maduro, the V32 and the CRV (Connecticut River Valley).

Another of Berger and Argenti successes was the Cubanesque Clasico cigar. The Robb Report awarded it the "Best of the Best" and Cigar Aficionado gave it an 88. Other reviewers on the internet gave it solid 90+ ratings. After two successful lines the Fatso was created to much fanfare. Cigar aficionados throughout the world had to at least try it. All who did LOVED IT!

So what happened? Basically, the aged Cuban-seed tobacco needed to continue making these great cigars was not readily available and production stopped. The folks at Berger and Argenti refused to compromise by using tobacco from different locations. There were cigars aging, lots of orders but no cigars. Instead of cutting expenses until the tobacco became available, business continued full steam ahead. Some call it bad planning while others believe it's sticking to your guns. Unfortunately the company ran out of money waiting for the tobacco. Employees had to be let go, the skilled rollers went elsewhere, and...well you know what happened next. It was over for the once prestigious maker of some of the world's best and highest rated cigars. 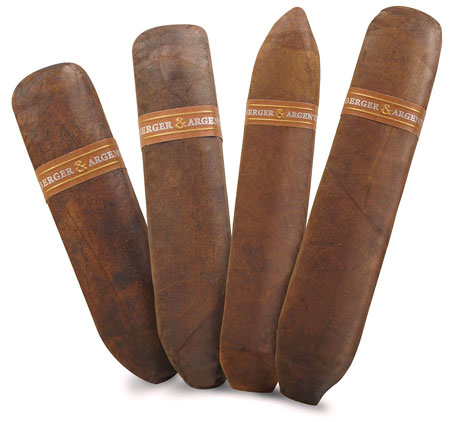 The cigars in the aging room were finally ready when it was too late. Cuban Crafters Cigars was able to get all those aged cigars, and now so can you. The Berger and Argenti Fatso is an experience worth having. There are 4 large ring gauge sizes, and a sampler pack of all four of the sizes. The Berger & Argenti Fatso Butterball is 6 inches long with a monstrous 70 ring gauge. The Berger & Argenti Fatso Bufflehead is 5 1/2 X 68. The Fatso Puddin is 4 1/2 X 64, and the Fatso Dipper cigar is 4 X 62. They come in a Cedar cigar box that is as unique as the cigar itself. It's handmade and has holes that allow air to enter so that the cigars age even longer. There's nothing ordinary about them.

We do have to warn you about two things. They should be smoked after a meal, as they're robust and not for the newbie. Also, while smoking them you may enjoy the experience so much that you'll want to buy every single box we have. In order to give everyone a chance to smoke them, we've limited the purchase to two boxes per customer. The good thing about that is that at Cuban Crafters Cigars you'll get an additional 10% discount for buying two of the same. Enjoy!