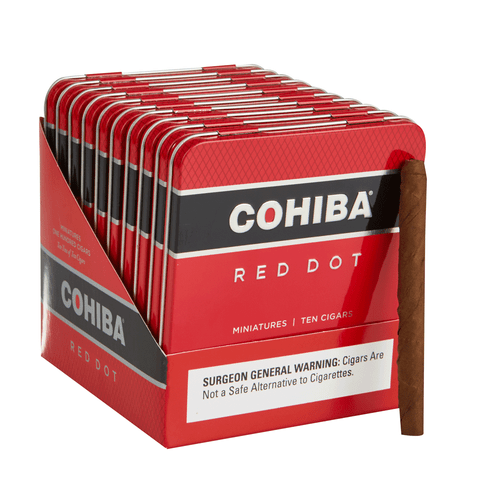 $22.99
Country of Origin Dominican Republic
Shape Cigarillo
Strength Medium - Full
Size 3 7/8 x 24
Grade Hand Rolled / Long Filler
Color Colorado
Binder / Filler Mexico, Dominican Republic
Wrapper Type Cameroon
Cohiba – the name itself is legendary. The original Cuban Brand of the same name came about when Eduardo Rivera was commissioned by Fidel Castro to create these rich, aromatic sticks for the elite of the Cuban regime. They became the must-have cigar for diplomats and others operating at the upper echelon of world affairs. When the American embargo of Cuban goods began, many brands were re-established in the Dominican Republic, where the Red Dot cigars are hand-rolled. A sensuous creamy smoke with luscious overtones of spice and peppers, the Cohiba Red Dot provides an even burn from start to finish. The ash is firm and well-formed. The cigars are a memorable smoke with a history as complex as its rewarding taste.
Five centuries after Christopher Columbus heard the word Cohiba for the first time in the Dominican Republic, a Cohiba cigar was developed in the same country by Diaz y Cia in l978. The Dominican Cohiba cigar, which was reformulated in the 1990s, is the only Cohiba cigar that can be purchased legally in the United States. The Cohiba cigar that is crafted today in the Dominican Republic took years to develop. The dark, rich wrapper leaf is grown in the sub-tropical West African climate of Cameroon. The supple and flavorful Jember binder is grown in Indonesia. To balance the richness of the wrapper, the smooth-smoking Piloto Cubano filler leaves are grown in the Dominican Republic. The Dominican Cohiba is a deeply satisfying cigar, rich in flavor and history that does not overpower the smoker.

Red Dot Cohibas' name is due to the red color on the letter "O" of the cigar band. This cigars are a medium-bodied flavor and a strong, smooth and. Handmade with a Cameroon wrapper and aged mixture of Dominican-grown Piloto Cubano. Cohiba cigars are synonymous with extravagant taste. Full in flavor, yet medium in strength, true cigar connoisseurs know Cohiba as one of the finest cigar brands in the U.S. market. Flawlessly handcrafted in the Dominican Republic, Cohiba boasts a Cameroon wrapper, a Jember binder, and a Dominican blend featuring three varieties of Cuban seed tobaccos. The result is a dimensional, slightly spicy indulgence.

Red Dot Cohibas' name is due to the red color on the letter "O" of the cigar band. This cigars are a medium-bodied flavor and a strong, smooth and. Handmade with a Cameroon wrapper and aged mixture...

Red Dot Cohibas' name is due to the red color on the letter "O" of the cigar band. This cigars are a medium-bodied flavor and a strong, smooth and. Handmade with a Cameroon wrapper and aged mixture...

MIO humidors are the perfect starter humidors. An elegant and Rich Cherry Wood Finish, Spanish Cedar Interior, and a scratch resistant felt bottom are just some of the fine features of this humidor...

BERGER & ARGENTI ENTUBAR DOUBLE CORONA 7 - 5/8 X 55 Named for the method in which it is rolled, the Berger & Argenti Entubar is one of the most unique cigars ever made! A classic Cuban...